Some of the images below are interactive. Hover over them for instructions.

The basic elements of study in real algebraic geometry are semi-algebraic sets; sets defined by polynomial equations and inequalities over \(\mathbb{R}^n\). One fundamental problem is the connectivity problem: determining whether two given points lie in a same connected component of a given semi-algebraic set S. We want to develop an algorithm to solve the following problem.

Drag the blue and green points around. Notice how the answer changes when the points are in different regions.

The interactive demo above shows we can solve a very simple instance of this problem. However, solving this problem for more interesting sets S is a very active research area. Many important or non-trivial problems in science and engineering can be reduced to the problem of deciding connectivity properties of semi-algebraic sets. The original motivation came from robot motion planning where one tries to decide collision-free motions for a robot in an environment filled with obstacles. The free space in which the robot can move can be modeled as a semi-algebraic set. Then one wants to know whether a robot can move from an initial configuration (a starting point) to a final configuration (an ending point) within the free space in a continuous motion. If this is true, one must find such a continuous trajectory. Motion planning problems show up in other diverse contexts such as computational biology, virtual prototyping in manufacturing, architectural design, aerospace engineering, and computational geography. 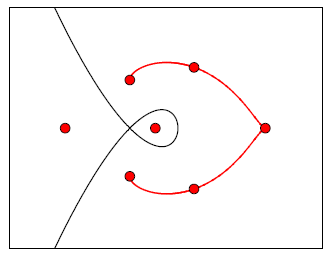 I am interested in several questions related to this algorithm.

A future goal is to obtain a bound B which behaves well under root translation, root scaling, and polynomial scaling. A second goal is to create tighter bounds. Some bounds are too small to be practical, so their use is generally restricted to complexity analysis.

The third problem related to computing derivatives of an implicitly defined function. The problem is, given \(f(x, y) = 0\), give a closed form expression for \(\frac{d^ny}{dx^n}\) in terms of the derivatives of f. Despite being a longstanding problem, a solution was first presented in 2012. A future goal is to come up with a simpler closed form expression than the one presented in that paper.

During my Master’s degree, I studied the nonlinear resource allocation problem.
$$
\begin{array}{rll}
\min &{\displaystyle f(x) := \sum f_i(x_{i})} &\\[1.25em]
\textrm{subject to} &{\displaystyle g(x) := \sum g_i(x_i) \leq b}, & \\[1.25em]
& \ell_i \leq x_i \leq u_i, &i = 1, \dotsc, n,
\end{array}
$$
where x, \(\ell\), and u are n-vectors of real numbers, b is a real scalar, and the functions \(f_i\) and \(g_i\) are
convex and twice differentiable on an open set containing the interval \([\ell_i, u_i]\). This problem has a long history and diverse applications. Moreover, this problem often serves as a subproblem that is integrated into a much larger model and solved numerous times. Hence, the development of efficient algorithms for this problem is extremely important. A fast method for solving this problem was presented by myself and a coauthor. There are several avenues for future research.

Technology in the Classroom

Currently, I assign Mathematica labs that must be graded by hand. I believe a future improvement would be the inclusion of automated grading with immediate feedback. At North Carolina State University they have a program called eMarker, originally called eGrader. This is a neat bit of software that randomly generates Maple assignments based on a template, then automatically grades the submitted worksheet and, most importantly, gives immediate feedback on any errors. The eMarker software seems to be well received by the students at NC State. I believe a similar bit of software that uses Mathematica as the back end would be much more powerful and would allow for better types of assessment than the Maple version.

I am currently investigating what makes a “good” instructional video. For example, I will be studying whether students prefer a video that include the instructors face or not, or whether they prefer pauses in a presentation.